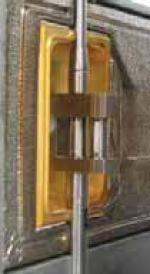 INTRODUCTION
In industry thermal curing is used in a wide range of applications like powder coating, adhesives, sealants, soldering materials, inks, etc. Recently there is an increased interest in replacing thermal curing by UV assisted thermal curing in an effort to improve product properties, increase productivity and reduce production costs, for example by reducing the amount of energy needed for initiating the curing reaction, at the same time.

For the development of, and measurements on, such kind of samples a new high temperature UV curing tool was developed for the HAAKE MARS rheometer.

The new UV curing tool for the CTC oven as well as selected results of measurements on different adhesives are presented.

The UV light source can switched on/off by means of a trigger signal from the rheometer which is controlled by the rheometer software. By programming an automatic measuring routine the sample can first be pre-cured by the UV light and then thermally cured using the CTC oven.

RESULTS
Curing behaviour of an acrylic resin adhesive
Figure 4 shows the UV curing process of an acrylic resin adhesive, which is used in the production flat panel displays, at a temperature of 20 °C. UV light with a wave length of 360 nm and a light intensity of 500 mJ/cm2 was applied to the sample for a duration of 4 min. The measurements were performed using a 10 mm diameter parallel plate measuring geometry. For this application no post heat treatment was necessary.

After a waiting time of 15 min (in which the temperature was increased to 35 °C) the glass transition temperature Tg of the cured sample was determined by gradually increasing the temperature from 35°C to 95°C. The Tg was found to be 74.5°C.

Curing behaviour of an epoxy resin adhesive
Figure 5 shows the UV and thermal curing behaviour of an epoxy resin adhesive which is also used in the production of flat panel displays. In this case UV light with a wave length of 360 nm and a light intensity of 500 mJ/cm2 was applied to the sample for a duration of 7 min. A post heat treatment was used to improve the product properties in respect of adhesion and stiffness. The measured normal force signal (up to 50 N with a 10 mm diameter plate!) shows that this sample under goes a rather large volume expansion with increasing temperature. This is something that should be accounted for during the production process.

CONCLUSIONS
The measurement result shows that modern rheometry is a versatile tool for analysing the properties of materials during UV curing and subsequent thermal curing. The curing behaviour of the sample and the mechanical properties of the final cured product could be determined in one continuous measuring job.

A complete copy of this application note is available by requesting HA-047.